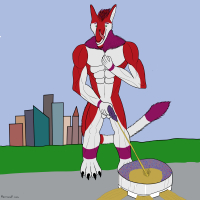 No better place to take a piss than in a packed stadium, as one macro sergal demonstrates. The accompanying art can be found here.

Nobody in the stadium noticed the initial tremors as their team had scored a touchdown. The roaring cheers of the fans rumbled down to the core of the packed stands, drowning out the rhythmic booms of the approaching monster. It was only as they set up for the extra point that the tremors became stronger and overtook the general euphoria of excited fans. An air of confusion and fear fell on the stadium as players and fans alike felt the ground shake beneath their feet in a rhythmic fashion. A collective gasp rose from the crowd with the sudden appearance of a strange shadow and the giant creature stomping up to the bowl shaped building. People stared up at the hulking red beast in awe and confusion, unable to figure out what it was, yet stopping to drool over his athletic build. Even the players felt a bit of envy at his muscular form. This towering mass of fluff was in fact, a sergal, looking down upon and chucking at the insignificant beings. He stuck his enormous tongue out, licking his muzzle from one side to another and curling his lips into a devious smile. The sergal had just one thing on his mind; he needed to piss badly, and this stadium was a natural toilet for the mischievous titan.

A deep grunt escaped from his muzzle as he grabbed hold of his limp cock and aimed it at the 50 yard line. The slit opened up and unleashed the golden torrent, hitting the field with such force that it dislodged chunks of earth and hurled them in the air. Unable to absorb this tremendous force of nature, the field flooded instantly, sending players and officials scrambling for safety. While some had the insight to run for the stands, the less wise retreated for the underground locker rooms, which proved to be a death chamber as they were filled to the ceilings with boiling urine. The fans were lauded into a false sense of security thinking they were out of danger being higher up, but what was effecting them was the smell. Having held it for so long, the sergal's piss was ripe, the nasty stench rising up and robbing all fresh air from miles around. A barely organized chorus of hacks and coughs rose from the stands as people covered their noses in a futile attempt to avoid the pungent fumes. It was about to get serious for these spectators though. The sergal's stream suddenly grew in size and intensity, leaving the golden pool nowhere else to go but up. Those in the front row soon found their feet dipped in the stinky fluid. Almost as soon as they rose to their feet to run for higher ground, they were waist deep in it. Panic spread upward around the stadium as fans made a dash for the exits.

"Awwww leaving so soon?" the sergal quipped down at the crowd.

He pointed his cock at one of the aisles full of fleeing fans, knocking them off their feet and sending them back down to the cesspool in a raging yellow torrent. The crowd screamed in horror at the realization that they were a target for this mischievous giant. What had been an orderly evacuation turned into an everyone for themselves stampede, climbing over stands and others to escape. The sergal let out a cruel laugh watching the speck sized humans trying to outrun his godly piss. He shifted his stream around the lower bowl, blasting away hundreds of hopeless fans with every passing second. The steel structure holding up the stands bent and groaned under the immense weight of the golden deluge. Seats came dislodged and joined the increasing numbers of people forced to swim in the growing pool of sergal piss. Anyone who managed to make it to the exits only found themselves trapped in the wide corridors as the ground exits had turned into angry rivers as piss streamed out from the stadium. It wasn't flowing out fast enough though, and soon the stadium was filled halfway up with the rank liquid. With no signs of the segal anywhere close to emptying his bladder, the fortunate ones who weren't drowning in this foul flood climbed higher and higher until they reached the very top rows.

The sergal aimed at the rim of the stadium, rumbling in sadistic pleasure as he slowly finished off the remaining fans. Some were knocked off the edge by his fire hose strength blast, sending them free falling to their death, while others were swept into the ever growing yellow lake. Thousands of fans hacked and splashed in the expansive cesspool desperately trying to keep their heads above the toxic lake. With his stream still as strong as ever, the sergal targeted the floating specks, the yellow blast forcing the struggling crowds deep into the foul piss pool. The devilish beast made quick work of drowning his quarry just as his stream subsided and his cock grew. Spurred on by the musky stench of his own piss, he rubbed his growing member, murring at the lifeless bodies that rose to the surface. Satisfied with his evil deed, he turned around, snorting evilly at the city in the distance and licking his muzzle. Civilization had only begun to feel the wrath from this malevolent beast. Now the sergal was horny, and ready to play.